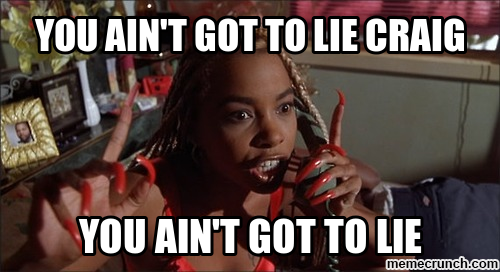 You ever had a friend/significant other that just lie for no reason? I mean, just tell unsolicited, bold face lies, for no logical reason? Ok ok, I know what you’re thinking: “like you’ve never lied before.” You’re right. I have lied…a lot (insert gasp). As a teenager growing up, I told my parents countless white lies. It was for their own good (that’s my story and I’m sticking to it). I’ve lied to college professors to get an extension, to bosses for times I was running late/sick days, even to little kids to get them to eat their veggies! Politicians, news outlets, gossip blogs, parents, spouses, best friends, kids-everyone does it. No big deal right?

All that is kid’s play though. What I’m talking about goes deeper than that.  I’m talking about that person who lies and really believes their own fabrication until it becomes a permanent part of their life. I’m talking about the person that forgets that you, the very being they’re telling the lie to, knows the truth, or even better, has access to screenshots that’ll ruin them. That person that lies to someone close to you who will, 9 times out of 10, come back and tell you!! I can’t even explain how it doesn’t even make sense! Why lie??

Ok, let me calm down for a minute. This drives me up the wall because it hits so close to home. Look, I’m not perfect, I have countless flaws, but being a pathological liar is definitely not one of them. For one, it takes too much time and energy to keep up with lies, and God forbid you get caught in a lie: utter embarrassment. So why would someone choose the path of being a liar?

Pathological liars can’t help it and lie for no apparent reason. If they get questioned about a lie, they use another to cover it up. Eventually, the lies just snowball into one great production. According to the American Psychiatric Association’s Diagnostic and Statistical Manual of Mental Disorders, they may suffer from other underlying personality disorders/mental issues. Pump your brakes though; don’t go pulling out your DSM-V every time you catch someone in a lie (esp you psych majors). Just take a closer look at the root of it and leave no rock unturned. If the friendship/relationship is worth fighting for, encourage him/her to seek psychological help. This is just my opinion after researching in my attempt to understand. I don’t know if I’ll ever mend the relationship; It’s still under consideration, but I will offer help.

What would you do?

Why is it that some of us constantly wake up like clock work and toil in another man’s land, even when we don’t want to? How is it that we aid this stranger in building his empire, but don’t take the time/effort to invest in ourselves, our dreams? And this cycle repeats itself year after year, and at times, more often than not, we complain about how miserable are, and yet, no change is made. One person answered this question bluntly, “Everyone ain’t cut out to be a leader or entrepreneur…they are comfortable being a worker. It’s a safety net.” That hit me like a ton of bricks…I can’t imagine being a worker my whole life, especially knowing that I will never be able to live the life that I dream about every day.

I read an article that categorized people like me (entrepreneurs, millennials) as lazy, unproductive, self-obsessed and opportunistic. For someone who has had to work part of their high school years, through college, and thereafter, that is simply not true. One thing that was certain through my years of working, I was never happy. The payoff was never enough for me. Having someone set boundaries on how much money I make, what hours I work, when I could or couldn’t go on vacation, just never sat well with me. Upon entering my 30s, I decided to make a change and stop the cyclical cycle. Initially, for financial reasons of course, I would work by day and moonlight my passion at night until I could afford to transition out of corporate America for good.

Daily, I am bombarded with the notion that I was/am created to put out all this content and creativity and literally feel like I could suffocate if I keep it bottled up inside. No joke!  That’s why I work hard daily to build my empire so that I don’t have to work for anyone else for the rest of my life. There are days I get scared and others where the uncertainty overwhelms me, but I choose to push forward. Frankly, if I had to go back to corporate America, I don’t know if I would be able to go on…
What are your thoughts?

"How is it that we aid this stranger in building his empire, but don't take the time or effort to invest in ourselves, our dreams?" -The TRIM Chix